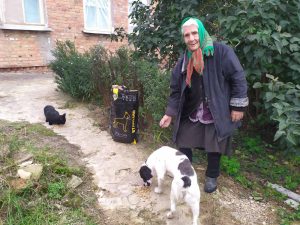 The most difficult season of them all lies right ahead of us: the advent of winter hails a long cold period with the prospect of no food or shelter for thousands of abandoned animals, stranded and left alone to wander the streets in a desperate attempt to avoid the bombs and survive the cold and hunger.

The more fortunate dogs living on the streets manage to find shelters made of sheets of plywood nailed together, with a simple tin roof. Colonies of cats use cardboard boxes that they have adapted to form inexpensive winter shelters. Many have only straw for bedding. Save the Dogs has already sent more than 150 kennels and hundreds of dog coats and blankets to keep them warm.

However, the real emergency is the lack of food, and the assistance provided by Save the Dogs is the only chance of survival for thousands of cats and dogs who have been abandoned or taken into shelters.

It is for this reason that we intend to continue sending substantial shipments of food to Ukraine to feed the animals between the months of November and February. Without our help, many of them might not survive the winter.

OUR SPECIAL OPERATION IN UKRAINE

We began our relief work in Ukraine with just a few staff members located near the border with Romania (specifically in Odessa and Izmail). As the war continued, Save the Dogs has swiftly expanded its outreach aid to other territories where there are also thousands of animals in need. Today, our work extends to cover a wide area of the country, including Kharkiv in the northeast, Mykolaiv in the south and Cherson behind the Russian front line.

The close partnerships we have developed with shelters and the volunteers who feed animals out on the streets are instrumental in allowing us to understand what is happening in the field, where the situation can change from one day to the next, and enabling us to maximize our impact.

Thanks to our partners and supporters, to date we have sent over 300 tons of food all over southern and northeastern Ukraine. Every two weeks we dispatch a truckload of food to more than 30 local partners, who distribute it to over 400 volunteers.