Chaining of dogs in the Piedmont , associations deliver a petition containing 5,000 signatures to President Alberto Cirio

Over 5,000 signatures have been gathered, petitioning for a change to the 1993 regulation which allows for the lifelong chaining of dogs in the Piedmont region. The petition was submitted to President Alberto Cirio on 1st February by a delegation composed of Sara Turetta, President of Save the Dogs, and Cristiana Cesarato, the legal representative who is responsible for Animal Law Italia in Turin, also acting on behalf of Green Impact and FONDAZIONE CAVE CANEM.

The 1st Report on chaining dogs in Italy and Europe published by these associations a year ago highlighted the fact that the Piedmont law is similar to the one adopted in Calabria and Sardinia, whereby the act of keeping animals on chains is not considered to be a form of maltreatment and the only regulation concerns the length of the chain. More precisely, the law merely stipulates that the chain must be attached to a cable at least 5 meters long. 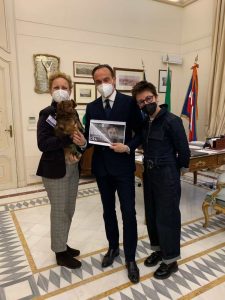 “We have asked President Cirio to agree to promote a significant change in animal rights in the Piedmont area – comments Sara Turetta of Save the Dogs – in virtue of the evolution of public awareness over the last thirty years and on the basis of authoritative scientific reports confirming that being kept on a chain is incompatible with dogs’ fundamental rights“.

During the meeting, Alberto Cirio showed a genuine interest in the associations’ requests and expressed his personal sensitivity towards this canine rights issue, particularly given the fact that the members of his family are also animal lovers. “Your appeal, which has been clearly established for health and safety reasons over a period of time and certified by a veterinarian, appears to me to be based on good common sense,” commented Cirio, as he browsed through the pages of the Report.

Call for a change to the existing law seems to have gathered consensus across the board of the Regional Council, but there is still opposition from Coldiretti and a number of farmers backed by the Lega, who have requested that farmsteads be exempt.

“If the prohibition of the keeping of dogs on chains has been approved in the Italian region with the greatest number of livestock farms, in Lombardy, it is unfathomable to me why it cannot be accepted by farmers in the Piedmont region,” comments Dr. Enrico Moriconi, Animal Rights Advocate in Piedmont. “The Region could choose to fund the construction of enclosures large enough to contain animals living in rural settings.”

“We are very satisfied indeed with the receptivity shown by President Cirio at our meeting – concluded Gaia Angelini, the President of Green Impact – and have high hopes that he will take positive action. Our campaign “Towards prohibiting the chaining of dogs” and the resulting report were developed not only with the intention of informing and raising awareness, but also to offer support and effective technical tools for the different institutions concerned”.

Two regions have already made changes to their regulations since Green Impact and Save the Dogs launched their report on chained dogs in March 2021: Campania has introduced fines for anyone violating the ban, and the Lazio region has changed its legislation from one similar to that currently in force in Piedmont to a total ban, other than cases certified by a veterinarian for health reasons.