After two months of absence, Green Life Recycling  (now formally an NGO, but nothing has changed in substance) was recalled to Cernavoda on December 5 to mop up the town before Christmas time.

As usual, the dog catchers did not focus on strays in the suburbs or hidden in th 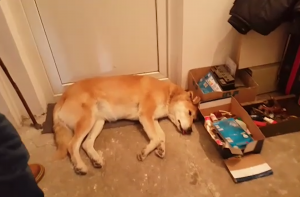 e woods, but on dogs protected by people around residential buildings or in public institutions. Sociable and totally harmless animals, taken away by dog-catchers, often among the tears of those who nurtured and cared for them.

A real crusade of the City Hall against the animals, in perfect harmony with the leaders of Cernavoda nuclear power plant, who  are said to have threatened their employees with an official statement to dismiss anyone who’s caught feeding stray dogs and cats. A climate of terrorism in which empathic people are punished. A total paradox.

Meanwhile, daily abandonments of dogs and cats continue at our clinic. In November we reckoned 21 dogs and 7 cats.
The clinic is collapsing again and we cannot take any more dogs from the street, not even to save them.