Despite the very sad start to her story… 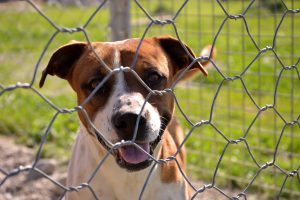 Pearl is a young American Staffordshire Terrier who was acquired by her owners when she was just a few days old. From the very outset, Pearl’s life became a nightmare because of the unsuitability of her adoptive family, who understood all too little about the characteristics of her breed – Amstaffs are very sociable, but tend to become combative and boisterous if left alone too long. Unable to manage her behavior, the family started beating her, and when she was just six months old, they decided to keep her on a chain, out of reach of the children. It was a case of out of sight and out of mind. Nothing more than dry bread was thrown at her from a distance.

Pearl was deprived of everything: freedom of movement, adequate food, loving care and affection. It was not even, as the saying goes, a dog’s life. 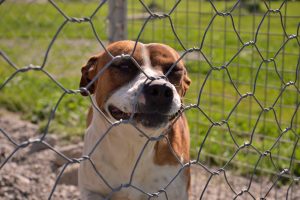 Thanks to someone contacting one of our partners, it became possible for Pearl to be relinquished by the family. This was the start of a new life for her. Pearl was no longer alone, and her suffering was no longer invisible. She was put on the dog registry and spayed and has now become a sociable and loving dog, despite her early suffering.

Now that Pearl has been rescued and is free of her chains, we are looking for a family to care for her for the rest of her life.

If you are interested in adopting Pearl or know someone who may be interested, thanks for getting in touch with us.

For more details, write to Giuliana Adamo at nonunoditroppo@savethedogs.eu. We look forward to hearing from you!