Boica, rescued, is now safely with his family 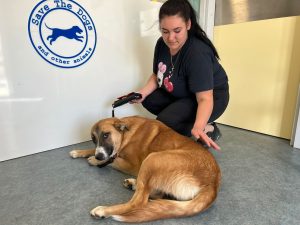 Boica is a male dog who was adopted by a lovely family from Seimenii Mici, one of the villages nearby. He enjoys the love and affection of the members of the family he lives with and has grown into a big, beautiful and healthy specimen. He is also a good-natured and playful dog, but even more importantly, he has shown great courage. Sadly, one day Boica ran away from home and found himself in Cernavoda, approximately 7 km from his own village. Fortunately for him, he was rescued by the Save the Dogs staff, because if it had not been for them he could have risked ending up in the hands of the dogcatchers and we might never have been able to retrieve him. Shortly afterwards, he was transported to and cared for at our shelter, where we were contacted by his family, who were desperate to find him. There were many other dogs in the same situation and we immediately took steps to identify them. We discovered that Boica was wearing a microchip, which meant we could call the owner, who was very happy and thanked us profusely for helping her find Boica. During the telephone call, she explained that she had been looking for him for over a week and said that she and her little girl had been in tears after searching for him for such a long time, and had been convinced that he would never return home. The family came to the shelter where they were able to confirm that he was their pet, and Boica was very happy indeed to see them again too. He is now safely with his family after our vets checked and sterilized him before he went back home. We are very happy that he is one of the lucky cases who has been returned to the safety of his family.