Friends on the street: the complicity between Stefano and Briciola 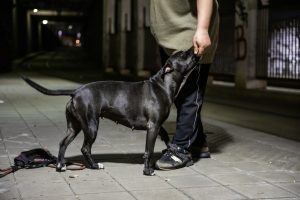 Stefano and Briciola approached us in complete silence on the evening we met. Stefano looked to be in his mid-30s and was visibly weighed down by his heavy backpack as he walked towards us. In one hand he held tightly onto Briciola’s leash, every bit as carefully as a father does when he squeezes his child’s hand as they cross the road. The dog walked faithfully at his side, and even though she was obviously more than ten years old, she still carried herself with the typical proud bearing of a German shepherd dog, with whom she appeared to have been crossbred.

We have been assisting Stefano and Briciola for over a year now, thanks to our Friends on the Streets project, which is dedicated to caring for dogs belonging to the homeless in Milan.

We knew exactly what they needed from us this visit: some tins of wet dog food to eat straight away, and some canned food to cover the coming days. They didn’t need any kibble or dry food this time, as they already had plenty.

After exchanging a few words with us, Stefano stepped away to feed Briciola. He filled her bowl to the brim and squatted down in front of her, as though to protect her. His dog calmly enjoyed her dinner, looking around from time to time. When she had finished eating, she looked straight into her owner’s eyes. He patted her on the head, washed the bowl out with a little water and hooked it back to the outside of his backpack.

He then joined the line to receive a hot meal for himself. Briciola is not allowed to stand there with him, lest she disturb the other people waiting in the queue. So instead, she waited for him a few meters away, never letting him out of her sight, sitting in front of the window of an upscale store on one of the main streets in downtown Milan. It is one of those central streets that by day sees throngs of tourists noisily charging in and out of the main doors, yet that evening she sat there all alone in the silence next to an insignificant store sign, guarding over the only item they possess: an old camping backpack and the bag of food we had given them just a few minutes earlier.

Stefano went over to join her a short time later, carrying some bread and soup. He shared the bread with her and then slowly ate his meal, while Briciola dozed at his feet.

Shortly after that, they took their departure, every bit as silent as when they had arrived.

Neither one of them needed to put anything into words. They have lived together since Briciola was just a puppy. We never leant how their story began or how they found themselves living on the street a few years ago. We don’t need to know, because it only takes one look at them to understand everything.

Every week we see a variation on the same theme repeated with many of the other couples that we assist. There are those who will only eat once they know their dog has had his or her fill, others who go to sleep embracing their pet, and yet others who squeeze right up in their tent so that they can make space for their faithful companion.

They are all people and animals with different stories and different backgrounds, but there is one thing they all share in common: the relationship between them is a stable, fixed point in a world that sometimes otherwise moves too quickly.

*Stefano and Briciola’s real names have been changed to protect the identity of the owner and his dog.