Ukraine - Helping over and beyond the conflict

“Everything went up in flames: the fencing, our winter supplies, the area where the children used to come to play.” We literally felt our hearts stop on reading these words from Lyudmila Melnikova, the director of one of the animal shelters in Odessa in Ukraine that we have been supporting for months. “How are you all? Are the animals still alive?” were the first things we asked her. The answer we received back was not what we expected.

We all waited breathlessly before Lyudmila emailed us back a few minutes later to reassure us: all the animals and people were safe. The fire had “only” affected one part of the shelter, the area where they stored the food and supplies they had begun to accumulate in anticipation of the colder months.

After getting over the initial shock, we asked her what had happened, fearing that the conflict had now reached her shelter as well. But it turned out that it was an accident: the blaze started because of a small household fire that had gotten out of control when nearby neighbors had decided to burn some garbage.

Due to the drought and the fact that the ground was extremely dry, the flames quickly spread to the facility.

Lyudmila opened the center just three years ago, and today it houses just under 100 animals including dogs and horses, all of whom have been sterilized, are up to date with their vaccinations and have been issued with passports.

The staff also take care of strays living in the area, for which they had set up shelters that have now been destroyed. “They used to live wherever they could find somewhere, but now they have learnt they can get shelter and food from us, so I had built some little kennels for them,” she told us.

Melnikova has also set up activities in the local area in collaboration with The Road to Home orphanage: children can go and play in the soccer field that is located inside the shelter, which is perfectly in keeping with the organization’s motto: “People help animals and animals help people to stay human”. 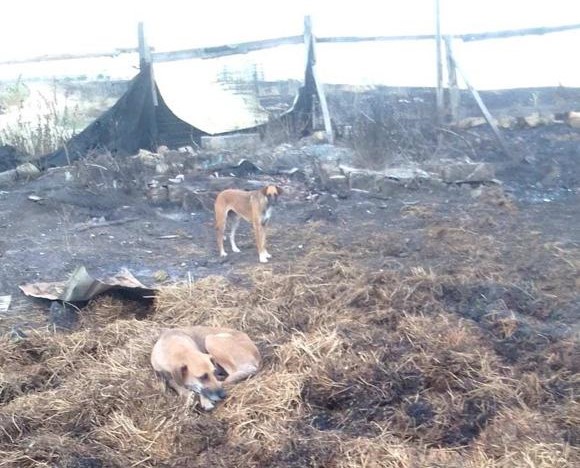 Now this whole area has disappeared. The flames destroyed part of the fencing and the garden, the hay that was in storage for the horses, the electricity poles, the children’s playing field and, most crucially, the supplies they had begun to accumulate for the winter months, which are particularly harsh in Ukraine. They had no electricity and therefore no light for a number of days.

Lyudmila wept as she asked us if we were able to help her: to rebuild everything she will have to wait until the war is over but, in the meantime, she needed to repurchase the food and hay supplies that had been lost as soon as possible.

We took immediate action and sent her the supplies she needed within days, together with several boxes of pesticides. We are still in contact with her, and it is a relief to know that everyone – animals and humans alike – is gradually starting to recover, although they will never forget the trauma of what happened.

We hope to be able to help them over the coming months, when the heat and drought give way to cold and snow, with all the problems the winter months bring with them.